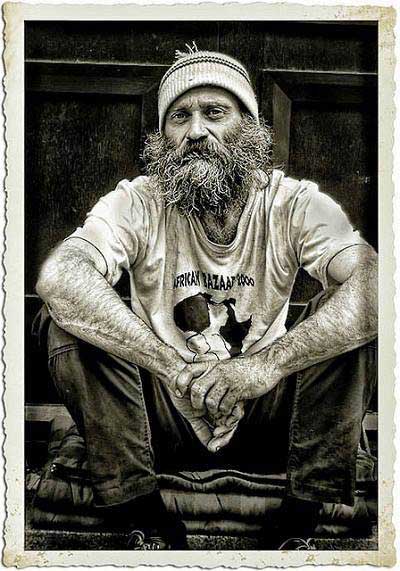 This post originally appeared on fvbf in July of 2013 when it made rounds on many social media sites.  It is making the rounds again.  I received a comment from Willie Lyle regarding this blog post.  I feel compelled once again, to share the truth not the lie. –Donna

A story just over 48 hours old is making the social media and email realms.  Pictured above is the photograph circulated as being Pastor Jeremiah Steepek, a newly elected pastor of a congregation of 7,000-10,000 members.  Sight unseen, apparently except for the church elders, Pastor Steepek reportedly went into his new church disguised as a homeless man.  He was largely ignored and even asked to sit in the back of the sanctuary.  The elders introduced him and Pastor Steepek’s first sermon shamed his congregation.  It makes for a potent reminder we are to actively serve and love one another. Sadly, Pastor Stecpek is not a real, verifiable person.  When I read the story I found a few red flags about it’s truth.  So I checked. The picture is of an actual homeless man, taken by Brad Gerrard in Richmond and posted by Gerrard on flickr Photostream and obviously used in a case of fraud. Whoever wrote and first posted the false story very well may have based it on a true story out of Clarksville, Tennessee.  The newly appointed pastor of Sanyo United Methodist Church was under a huge tree on the church lawn his first Sunday.  He had spent a week living as a homeless person.

(Photo from June 23, 2013 report on LeafChronicle, all rights reserved.) His 200 member congregation witnessed his daughter and daughter-in-law help him transform back to himself during his sermon.  Twenty of his church’s members offered him assistance when he was posing as a homeless person.  This pastor’s name is Willie Lyle and his sermon though meant to move Christians to action was not, as I understand it, about shame. In the fictional account Pastor Steepek also wants change, good change, and the author of his story agrees.  The real man and Pastor Lyle wanted change too, equally good change. Which of these two stories shows real hope?  Points out a real plight for thousands of people?  Why was the real story so less impressionable? How many of us read this first story and felt a flicker of self-righteousness?  How many of us had a feeling that, “…they got what they deserved”? Why does the first story become an social media sensation in 48 hours and the second story not? When the mighty fall they fall loudly don’t they?  When our hands in the cookie jar we see the speck of dust in brothers eye but not the planks in our own, right? -Donna (a.k.a. Faye)

2 thoughts on “Lie vs. Truth: Steepek or Lyle”