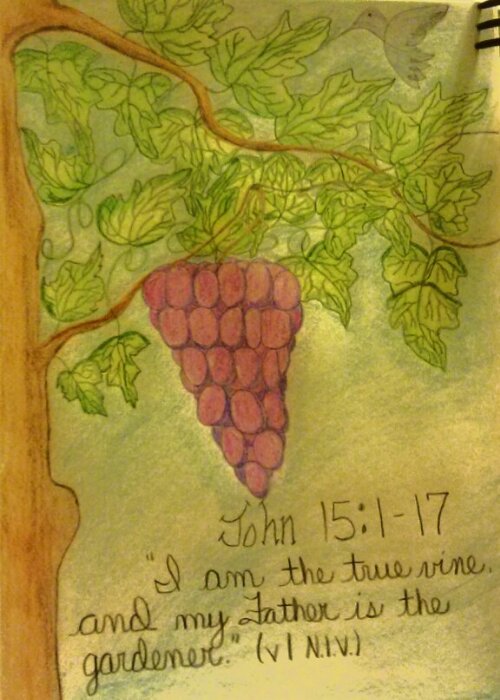 As a college student I attended a conference at the Blue Ridge Conference Center where a media presentation was given on the passage in the Gospel of John chapter 15 verses 1-17.  Whoever put this presentation together used the most up-to-date technology and techniques available, which by today’s standard would seem amaterurish but then it was awesome.  It was powerful and the story has remained a memory I’ve held on to for over 20 years.  I’m honestly not sure of the legal issues behind my replay of it for you, but I want to share the message.

The presentation of this passage on the vine and the branches is given from the perspective of The Vine.  The Vine was content in the life it had in the vineyard with the Gardener and flourished under his attention.  It bore fruit especially appealing to repay the Gardener for the Gardener’s work and time spent with him.  The Gardener talked to the vine as he tended to it daily, making sure it could grow uninhibited and flourish with life.

The Vine trembled in fear when the pruning time of the season arrived and the Gardener’s shears snipped away dying parts of the vine, vines that threatened to overtake the other parts of the main vine so it could not survive, the parts of The Vine, that if allowed to remain, would reduce the vines ability to produce a good harvest in the next growing season.  It was a painful process for The Vine but the care and love given to The Vine by the Gardener made the ordeal bearable and The Vine came to understand it in time even though initially it was hurt, wounded and scared it made the decision to trust the Gardener for the Gardener had always acted with love toward The Vine.

The Gardener had one rule for The Vine that The Vine itself had to adhere to and that was that it was never to allow birds to make a nest in its branches.  The Gardener told the Vine to allow the bird to make its nest in its self would mean death.   However when spring came and the birds would arrive tweeting and singing so cheerfully, so friendly The Vine found itself questioning why the Gardener would forbid it from allowing the bird to make its home within its branches.   All the branches talked amongst themselves and decided that though The Gardener was so attentive, so caring, so knowledgeable but that surely, in this one thing, the Gardener was wrong.  How could it hurt to have such an attractive, cheerful presence within it?  Surely it would not mean death!

Now the bird knew why the Gardener didn’t want her to make her home in the branches of the grape vine but she didn’t tell The Vine how she would cause it to die.  Vainly she didn’t care.  Making her home there would be to her advantage.  She would have easy access to the grapes, she would be well hidden from predators when her nest was built within The Vines protective branches so she seduced The Vine with all of her charm and sweetness.  The Vine relented and all the branches acted together to keep the Gardener from finding out that it had disobeyed him.

Before long though, as the nest held new life in it, The Vine’s secret became visible.  In its actions to keep the birds nest and the birds a secret it had not paid attention to how it was growing or not growing.  The Vine failed to notice the leaves on its branches dying, failed to feel death itself slowly seeping into its many vines to the branch.  But the Gardener noticed.

The Gardener waited a bit, hoping the Vine would notice itself dying and expel the bird but the Vine did not.  So weeping the Gardener came with pruning shears and a small saw in hand and after evicting the birds, removed the nest and began cutting away all The Vines.  It was far more painful than the pruning the Gardener had done before.  Far more evasive and the results were far from pretty.  When the Gardener was finished all that remained of The Vine was the original trunk.  The Vine was sure it was dead.

Then the branch, all that remained of The Vine, felt the slice of a sharp knife in its trunk.  Feeling the pain of it The Vine was awed even in the midst of its pain for it had thought it was dead but pain meant it still had some life in it.  Then the Gardener fitted the branch vine from his personal grapevine into The Vine’s remaining trunk.  The Gardener bandaged the grafted branch to The Vines trunk and simply walked away.

Of course this story represents the story of the fall of mankind and God’s gift to us of Himself as Jesus Christ.  That gift was the Master Gardener’s own heart.  But this story has stayed with me for 20 years and I am most happy to share it now with you.  Forgive me if there are parts I’ve forgotten or remembered incorrectly, twenty plus years is a long time!