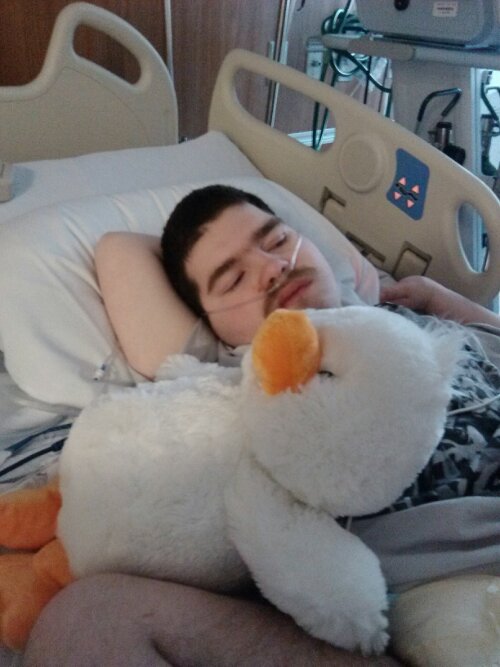 Photo original to author, all rights reserved, not to be used without permission.

He was special, there could be no doubt of that, not to anyone.  Yes, this little guy who looked to be sleeping soundly had my heart wrapped around his tiny, puffy finger.  Since the day he came into the world all covered in wet gunk and wailing loudly, he was special.

At first they kept him because he might be sick, but after several days of negative tests his parents had been ready to get him home.  His big sister waited for him, it was time to make the family unit whole and under one roof.  That pretense lasted a few days.  His biological parents marriage was already shattered, the impact of his illness simply gave it breath to implode.

Back to the hospital and he would stay for 60 days, 45 of those in a coma.  The doctors gave him little hope to survive, gave us little hope to bond with our boy. But I made the trek daily, he shouldn’t be alone.

A few hours before work, then five hours at work and another five at his bedside, often going back to work or working beside his bed, sometimes spending the night if he had a bad day.  Those days are a blur in my memory now.  A long tiring, exhausting two months of staying with him as much as possible, whenever possible.

I remember the cocoon like room in Children’s Hospital, the never ceasing beeps and swirling sounds of equipment breathing for him, living for him.  And I remember the day they became quiet and he surprised everyone by living under his own steam.  I recall clearly the kindness of nurses who offered me food and drink, blankets and pillows as I stayed by his side.

I remember the quiet swish of the nurses scrubs as she laid him in my arms and he curled up on my chest and shoulder and slept on for the first time in over 45 days. I remember singing him every song I could recall; silly songs, hymns, praise songs, children’s songs and telling him every story I could remember and dozens and dozens I made up.  I told him about his family and all the possibilities for him in the world.  I told him about ice cream, baseball and Jesus.

He and I waited too.  The staff and I walked around his father’s dirty underwear on the floor and his near empty bag on the sink until I broke down and picked them up, embarrassed by their presence and their message.  It wasn’t my place to be there alone with this precious boy but I was, I was and I wanted to be.

It wasn’t until weeks had passed that one of the nurses told me how remarkable she and the other staff thought I was for my dedication to my son and my ministry.  Awareness flew in my heart, and I apologized telling her I appreciated the kindness but I wasn’t the mother, I was the aunt. I knew his mother came two or three times a week for brief visits, spoke with doctor’s by phone and waited for her marriage to fail or survive, her son to live or die. The pressure was enormous and too much, it was overwhelming and she did what she had within her to do. Never giving up but watching as what seemed like a nightmare play out before her with her son center stage. That’s a difficult place to be in. I understood that and I willingly made sure our boy didn’t want for company.

Toward the end of 60 days I sat with my sister and heard the grim prognosis…blindness, brain damage, feeding tubes, never speaking or walking.  Their advice was to put him in a home and get on with living.  His mother bravely took him home where she and our family took care of him until he reached the age of 12 and it was impossible to continue. My sister’s life revolved around her son and his needs. She gave everything.

For a while we thought he would prove them totally wrong.  He learned to drink from a bottle, he reached for toys, he responded to sounds, he was behind in development but he was getting there.  But at his first year check-up the bottom fell out again.  That same scenario repeated itself until he was developmentally a two to six month old in a body aging and growing normally.  His brain was destroyed, he lives today, now 19, with less than 5% of his brain stem.  As I write this he is in a different Children’s Hospital, a very sick young man, beating the odds again.

His mom is front and center, caring for her son with deep love and compassion, fighting for him every step of the way.  His dad, his mom’s second husband, watches with pain in his heart as his son lays ill.  His biological father struggles to find his place in his son’s life.  His sisters cringe inside as they soothe and comfort him.  I sit and speak with him and it is me keeping tab by phone this time.

Healing.  We all want that for our precious boy.  Someday he’ll have it.

Healing now though, ultimate, complete healing I see may be the healing of the wounds and scars of a long ago young marriage gone bad that remain like open and raw pieces of rotten meat. Like the bleeding pieces of two hearts who lost their way in that special first love and never to refind one another, or find some release from pent up anger and pain.

It may be the solidifying of his support system, all of us pulling in the same harness for him, all focused on his best well-being.

It could be the healing of a heart within a man, more than a stepfather but a true dad in every sense of the word, who bonded with our special child. A heart who knows that this boy is the heart of his heart, soul of his soul just not flesh of his flesh nor bone of his bone but his son all the more.

Or perhaps the healing of regrets in the heart of a biological father who allowed circumstances to keep a gap between he and his first born children for 17 years. Who struggles, it seems to me, to find a place in his biological sons life.

Only God knows what ultimate healings He has planned for and through this one very special life. Through and because of the life of our special boy…healing is just waiting to be invited in to stay.

Yes, our boy is so special and he still has my heart wrapped around his little finger.