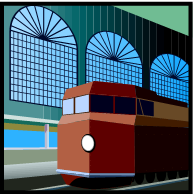 “You already know Mr. Albert but this is like a central station, people come here with and without tickets already. So some are just making their decisions and some are here, like me, to redeem their tickets.” Ace replied, looking at Mr. Albert seriously.

“Very good Ace. Very good indeed. Does this mean you have no more questions for me?”

Ace smiled, “Now you’re being awfully silly! You know I ALWAYS have questions. Like, what about those people who keep darting in and out? What are they doing?”

“Those are the ones who know they need to get a ticket but keep waiting until the last possible minute. Some are sure they can never live up to the standards they imagine are necessary to make this trip. Some want to be sure they wring every possible moment of worldly fun out of life before making the decision. All of them just keep putting it off for one reason or another.” Albert tried to hide a sigh from his young charge.

“The ones who keep glancing in but never really turning their heads as they walk by, who are they?” Was Ace’s next inquiry.

“Those are the ones who can’t help but be curious but whose minds just won’t allow them to accept things as they are, they want things complex and puzzling so they can boast they have figured out the secret to life. They keep glancing in because a part of them knows the truth but the larger part just can’t accept it yet.” Albert answered. “We’re happy when most of them eventually make the decision to come on in.”

“Those men and women on the steps who keep calling out to the people, why are part of them saying, “Come on! Hurry up time is short!” and the others saying, “Don’t worry, it’s still a long way from pulling in!” Ace asked next.

“Those would be the truth tellers and the deceivers. Can you tell me which group is which?” It was Albert asking the questions now.

“Oh yes! The truth tellers are the ones telling people to hurry for there’s not a lot of time left to decide. The deceivers keep assuring everyone they have plenty of time so people feel safe in putting off their decisions.” Ace replied seriously.

“Thank you.” Ace paused, looking around and then staring at another group of people before asking her new friend another question, “Mr. Albert what is wrong with that group of people? The ones standing there holding their boarding passes but instead of moving into a line they keep looking and shaking their heads?”

“Those my dear one, are people who made the decision to take this trip, got their tickets and now can’t believe it’s good.”

Ace giggled, “Why that’s silly! Didn’t they want the ticket to begin with?”

“We will help everyone, we’ll have it sorted out shortly.” Albert pointed out a line of people in uniform like him and smiled as he said to Ace, “Speaking of help, it looks like some of my team members have their hands full with a load of babies this morning.” Albert pointed to a group of men and women of all ages, shapes, sizes and colors who were strolling right into the station and onto the train platform, each with one if not two babies safe in their arms. “Those are the youngest and the most innocent they never have to decide they are too young.”

“Mr. Albert, where did they get all those babies?”

For a brief moment Mr. Albert’s smile faded as he replied, “Ace you know that sometimes, no matter how much a child is wanted and loved it is called home. Some of those babies are babies just like that.”

“The others?” Ace looked up a quiet knowing in her eyes.

“Those are the ones who weren’t wanted.”

“No Mr. Albert, they were wanted, just not by the mommies who had them in their tummies. Plus, God wants them. God wants us all!”

Ace looked around her, absorbing the scene. She’d never seen such a diverse group of people before. Old people, babies, young children and every age in between. There were skin tones she’d never seen in real life and a mix of males and females. Some people looked poor and others looked rich. Some looked relieved and some looked frightened.

“Come along now Ace, your train is approaching, you’re too go with the group with all the babies. Maybe you can hold one!” Albert remarked, pulling Ace to her feet and moving with her pass the platform gate to the group of men and women holding the many babies.

“Oh!” Ace stopped and stared as a group of people looking very sad on the other side of the platform caught her eye. “Oh Albert are those…” her question trailing off.

Ace knew those were the ones who made the wrong decision and now their journey would take them to a most different destination. But she knew it was not her place to judge the final destination of anyone even though it certainly looked like it was a group who were now headed far from the presence of the Almighty.

“Albert, will I see you again?” Ace asked suddenly as the train pulled into the station and was slowing down to stop so the passengers could board.

“Most definitely! Now, you go on, lots of people are waiting for you as well as Our Father!” Albert joyfully replied. Putting her hand in the hand of the conductor who would help her aboard the Express.

The train pulled away and Albert waved and smiled as he watched through the windows of the car where Ace had settled. Indeed she had offered to help with one of the babies. Albert knew they would be to the next gate in no time at all. 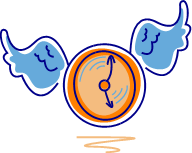 “In no time at all Daddy?” Ace asked her daddy. She lay in a hospital bed with IV’s, monitors and oxygen attached to her, machines trying to make her comfortable, like the medicine they’d given her that made the pain seem far away.

Through his tears Ace’s dad spoke, his voice choked with tears. “In no time at all Baby.”

“You can come too Mommy.”

“I know and I will. Are you hurting sweetheart?”

But Ace didn’t answer, it seemed her parents were fading away and with them a light was filling the room. There were shadows in the light before they came into focus and Ace could see she was looking in the door of the station.

She was going home in no time at all.

Losing a child at any age is heart wrenching to parents. Ace is a fictional character, as are all the people in this story. But the reality of not putting off the decision about your eternal home is very real.