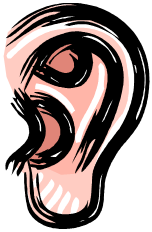 The theraeus lists the following words as some synonyms for slumped: drooping, wilting, flabby and floppy. Granted “slumped ears” isn’t a term heard every day and honestly I’d never heard it at all until I misheard something my daughter said. (She said slim beard, I heard slumped ears!) Be that as it is, the term gave several people some laughter and me an idea. Do we listen to God with slumped ears?

Jesus is recorded saying in Matthew 13:3b-9, 13b-23 “A farmer went out to sow his seed. As he was scattering the seed, some fell along the path, and the birds came and ate it up. Some fell on rocky places, where it did not have much soil. It sprang up quickly, because the soil was shallow. But when the sun came up, the plants were scorched, and they withered because they had no root. Other seed fell among thorns, which grew up and choked the plants. Still other seed fell on good soil, where it produced a crop—a hundred, sixty or thirty more times what was sown. He who has ears, let him hear.” When Jesus disciples asked him why he spoke to the people in parables Jesus replied, “Though seeing, they do not see; though hearing, they do not hear or understand. In them is fulfilled the prophecy of Isaiah*: ‘You will be ever hearing but never understanding; you will be ever seeing but never perceiving. For this people’s heart has become calloused; they hardly hear with their ears, and they have closed their eyes. Otherwise they might see with their eyes, hear with their ears, understand with their hearts and turn, and I would heal them.’ But blessed are your eyes because they see, and your ears because they hear. For I tell you the truth, many prophets and righteous men long to see what you see but did not see it, and to hear what you hear but did not hear it. Listen then to what the parable of the sower means: When anyone hears the message about the kingdom and does not understand it, the evil one comes and snatches away what was sown in his heart. This is the seed sown along the path. The one who received the seed that fell on rocky places is the man who hears the word and at once receives it with joy. But since he has no root, he lasts only a short time. When trouble or persecution comes because of the word, he quickly falls away. The one who received the seed that fell among the thorns is the man who hears the word, but the worries of this life and deceitfulness of wealth choke it, making it unfruitful. But the one who received the seed that fell on good soil is the man who hears the word and understands it. He produces a crop, yielding a hundred, sixty or thirty times what was sown.” (*Isaiah 6:9-10)

While the terminology “slumped ears” isn’t found in the Bible, I draw the parallel between ears that are slumped spiritually as this: ones along the rocky paths where God’s word is snatched away before their droopy spiritual condition can hear, ones where God’s word is barely received because of their slumped spiritual condition so the word doesn’t sink all the way in and root into the heart and mind, and the slumped spiritual ears that are on humanity whose hearts and minds are ensnared in the worldly views of success, right and wrong and are quickly overpowered. Ears that are not slumped but perked up and listening, open, allow God’s word to enter, be heard and root deeply into hearts and minds so their hearers lives are changed are then able to be used by God to share His word to other ears, other hearers.

How many of us fit into each category? Are our slumped spiritual ears bouncing the word of God off as seeds on a rocky path? Are they hearing on the edges but so slumped the word can’t reach our hearts deeply enough to produce a harvestable crop? Are our slumped ears bent over and flapping in the wind unable to survive among the noises of the world? Or are our ears open? Cleaned out. Attentive to the message of our Heavenly Father?