My husband and I had been married ten years when we finally accepted the fact that God did not intend to give us children the “natural” way.  We had suffered through our third miscarriage and the heartache for me was heavy and suffocating.  On top of this I had been through other health issues that made even trying to have another child ill-advised.

I had become one of those women who looked longingly at new-born babies in their parent’s arms and felt as if I was being stabbed in the heart by the site.  Toddlers who wobbled their way down the church aisle or said “Hi” to everyone they saw when they were encased in shopping carts being pushed along sometimes brought tears to my eyes.  I would mentally compare the ages of the children I saw with the children I never saw, the ones who died inside of me.  It was a process but I did reach a point of acceptance.

My husband and I did discuss adoption but we also did so with a lot of bad information in our minds.  We failed to actually look at adoption or contact an adoption agency or child protective services about fostering in hopes of adopting.  From the stories we’d heard about adoption people were going through agencies who arranged adoptions from countries overseas and the costs involved prevented us from trying.  So although we know better now, we didn’t then and we failed to educate ourselves properly.  However, God was working where we were not.

Christmas time 2005 and I agreed to sing one solo with our church choir.  It was a song I’d heard Whitney Houston sing in the movie, “The Preacher’s Wife”.  The morning of the performance as I stood to sing, the words enveloped me to the point it felt as if they were a physical thing.  “Mommies and Daddy’s, always believe, that their little angel is special indeed.  But of all of the wonderful things they could be, who would imagine a king?”  Of course the song refers to Mary and Joseph with Jesus but the miracle of Jesus birth was renewed in my heart.  As I sang, my hand rested on my stomach, right where a baby would grow, and I prayed from the innermost depths of my heart one more time that God would open my womb and allow me to have a child, allow me to be a mother.

That same Christmas my husband’s sister, her four-year old daughter and his mother moved in with us for the third time.  Our 16×80’ pre-manufactured home was full of people, but Alicia* my sister-in-law had enlisted in the Army and with my mother-in-law, Helen*, aging and beginning to experience more serious medical issues it made sense that she and Kiana would move in with us until Alicia got her orders and settled in one place following boot camp.  It took a little longer for Alicia to get all the pre-enlistment things in order than she’d planned.  One thing that slowed down her process was the custody issue of her daughter, a matter still unsettled when Alicia left for boot camp in April.

Kiana’s custody turned out to be a legal maze of red tape, greatly hampered by Alicia’s absence in court, her presence in boot camp and her not responding to court sent communications.  Another obstacle was the inability we had, or our attorney had, in being able to reach Kiana’s biological father.  A third was the lack of cooperation with the Department of Children’s Protective Services in Tennessee, who even refused to talk with the judge in our case.  Meanwhile we had undergone a home study through our Department of Human Resources in Alabama and were granted foster parent eligibility status.  This would have allowed us not only to have legal custody of Kiana but enroll her in Medicaid and receive other services from the state and DHR.  We elected not to apply for nor receive any of these services.  Kiana was our responsibility and we would provide for her.

By the time we’d finally settled the custody issue and my husband and I were her legal guardians the entire case changed.  Alicia called shortly after she’d completed boot camp from school in Texas and asked me if we’d adopt Kiana.  When I got home Helen asked me if Alicia had called and I told her yes, hesitating to tell her she’d asked us to adopt.  Helen hesitated to tell me her news too but we finally just said what needing saying and between us we had a better picture of what was going on.

Alicia was pregnant and the father was a fellow recruit from boot camp who was also with her at school.  They planned on getting married when school was over.  What I suspected to be part of the picture we were not seeing was that her fiancé’ wasn’t thrilled with the idea of raising Kiana.  It would be a few years before Alicia admitted that to me.

Meanwhile, Alicia’s second pregnancy was difficult, especially during the first trimester and the Army discharged her on a medical discharge.  She moved back to her hometown, living with different friends and planning a wedding as soon as Paul* was out of school and on leave.  Finally Helen moved back too and they moved in with Helen’s mother.  Paul joined them around Thanksgiving.

We went to visit and to secure Alicia’s signature on her giving up her parental rights so we could go ahead with adoption.  The whole visit was awkward.  Kiana sensed Paul didn’t like her and she wasn’t thrilled to see that a new baby was growing in her Mommy’s tummy.  During our trip to Dollywood Paul’s mood was dark and Alicia cried.   We split into two groups, Alicia going with Paul to the arcade where he wanted to go and the rest of us to do the rides and things in the Pigeon Forge located theme park.

At the end of the day, when dark had fallen, we prepared to leave and Kiana’s heart was broken.  She was really unhappy leaving her Mommy with Paul since Paul had made her cry, she was tired from being active all day, and she was torn between the Mommy she loved and the Mama and Daddy she also loved.  Even at four she recognized she felt safer with us, but Mommy was who she’d known her whole life and who seemed so unhappy without her.  None of us knew that this visit would be the last time we’d see Alicia and Helen for a very long time. 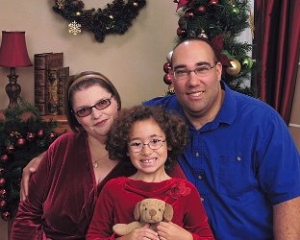 *Names changed to protect the privacy of those involved.