“For I know the plans I have for you,” declares the Lord, “plans to prosper you and not to harm you, plans to give you hope and a future.”

My nearly eleven-year-old daughter has incredible dreams for herself when she “grows up”. They tend to change,

but they are her dreams.  One day she wants to be a rock star/pop star/missionary and the next she wants to be a veterinarian, or a dolphin swimmer.  Recently her adoration of squirrels has reached a new level and she spends a great deal of time trying to “squirrel” up her life…she wants to catch a squirrel and keep him for a pet, she wants to re-do her hot pink and zebra striped bedroom to “squirrel”, and a few other “squirrelly” ideas.

I refuse to squash any of them, the ones I can’t help put pray do pass – like the squirrel ones – or the ones I know will pass like meeting and marrying her favorite “boy” in her favorite boy band.   Dreams squashed, especially cruelly or in laughter, kill a little bit of a kid’s heart and hurt for a long time.

Growing up I had a few “dreams” – you know those “when I am older” daydreams we nourish to see us through the not so great times, or long car rides, or to help us drift off the sleep at night?  The ones that help us determine our “adult goals” because we explored options in our younger years?  As kids we hold on tight to them until someone or something snatches them away.  Mine were pretty common ones:

The closest I came to being a country-western singer was singing contemporary Christian music on numerous occasions at churches big and small when I was in college.  By then I had the dream of making music a career pretty well stamped out of me.  So although singing was still a HUGE thing for me, I never considered it a career choice.  Not because of a lack of encouragement from people at that point in my life but because of one incident as a kid.

Playing Barbie’s or from the back seat of the family car on trips to do errands or visit family I belted out Loretta Lynn, Lynn Anderson, Johnny Cash and the Carpenters as if I were already on stage.  Then one afternoon my parents pointed out with a good dose of laughter that I couldn’t carry a tune in a bucket!  I was crushed.  Me?  But I loved singing.  I couldn’t sing?  I didn’t dare argue.  I just sang a lot less, a lot, lot less.

Now being beautiful?  Well, some of that is gene related – but even making the best of what the genes gave me didn’t hit the world’s idea of beauty.  Nor did dozens of prayers I prayed asking God to “work me over” during the night so I’d wake up pretty.  When a dear friend in high school, who happened to be a boy, remarked to me I should think about being a plus-sized model because I was “cute enough” I nearly choked on my lunch.

First I told him not only was he crazy because models were never plus-sized but second, I informed him, no one ever uses cute in the same sentence as my looks.  That moment could have feed my dream of beauty but it didn’t.  That one had long ago met the chopping block.  Had I not heard enough by then the taunting of kids about my weight?  Or the well meant discussions with both parents about how I’d never “catch” a man if I didn’t slim down?  Or the still unforgettable “talks” from my aunt, who pointed out that she had just read about a man weighed so much he was buried in a piano case and my grandmother who when I wasn’t married at 14 was sure I was going to be an “old maid”?  I mean how many times does one kid hide in the girls room stall sobbing to know she is NEVER going to be “in”?

Dreams of being a writer were almost snuffed out as well.  Prior to a time in the tenth grade when a combination of teenage drama, low self-esteem, no boyfriend, a home life that looked one way outside the house but in reality was something else and a mixture of other things had me on the ropes I took 24 Dexatrim.  When I ended up in the hospital, not in the gravest of danger but still with a heart beat zigzagging all over the place, in marched my dad who informed me of the fate of all those treasured poems and short stories and novel attempts and journals, he had burned everyone of them.  No more “dream world” for me, he announced.  I took to writing in secret if I did it at all.

Funny how I can remember every moment that sliced and diced my dreams into pieces that never quite fit anymore.  All of that took place well over 25 years ago. 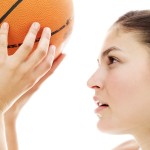 I refuse to do that to my daughter’s dreams!   Even when I foresee a not so great experience approaching (basketball was not her “thing”) I encourage her to try if it is what she believes she may be good at.  There is no shame in trying, no shame in not being a female Michael Jordan – if she is trying to do what she believes she may be good at doing.  When basketball proved to be an awful experience her dad and I wouldn’t let her quit, for she also has to know that dreams become reality, big or small, from commitment and hard work.

she lacks talent in that area.  I don’t want her sitting on the sidelines of her own life WAITING to live it.  At 48 years of age when she looks back I want her to remember her mother cheering her on, not joining with the crowd and booing her.

As for me, well, I don’t sing anymore except from the church pew and the steady stream of solo pieces I keep practiced up in the commute to and from work for a reason I don’t know yet.  Somehow losing my leg has meant no choir loft, no special music.

Slowly I’m starting to understand that if other people, especially God, can look at the “inner me” and find “beauty” that maybe I can too.  This one is taking a little more time.  But it’s been a few months since I hid in the restroom to cry over a careless remark or look or my own disappointment in my outward appearance.  That’s progress!

Being a writer?  I found that dream has proven to be the hardest to die off!  I can’t re-write or recover those earliest writing attempts but I cherish the time I can spend writing now.  I don’t write as much in secret anymore.  I have this blog that I use as an outlet, a step towards the writing dream.  I’m no Duane Scott (http://scribingthejourney.com) or Dusty Rayburn (http://devotedconversations.com) but as I tell my daughter, we don’t have to be like someone else, we can be who we are and use what we have to fulfill our dreams, to know God’s plan for our lives.

Most of all, I tell her, pray about your dreams, for God always answers prayers one way or the other.  He may help shape your dream into another altogether but always for His glory.

“May he give you the desire of your heart and make all your plans succeed. We will shout for joy when you are victorious and will lift up our banners in the name of our God.”